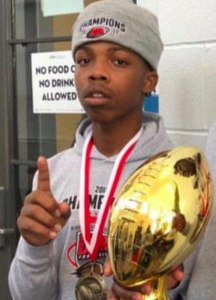 Did negligent security contribute to the tragic loss of this teenage boy and are justice and compensation available to Gerald Watson’s family?

15-year-old Gerald Watson ran for his life through a Washington D.C. apartment complex December 13, 2018, before he was fatally shot by two assailants in a stairwell. Police have since made an arrest, but grave questions over apartment security measures remain.

According to The Washington Post, the Anacostia High School freshman “played basketball in a late-night league called Shoot Hoops Not Bullets” and “guided troubled classmates through therapy sessions.” Additionally, Mr. Watson “made a name for himself on the football field, helping his team win a recreation-league championship.” The promising young athlete “was heading to a recreation center to play basketball when he was killed.”

Apartment residents and guests have a right to feel safe and secure while on the premises. The Murray Law Firm questions the level of security provided at the apartment complex and whether this tragedy may have been prevented.

Generally, property owners are required to protect all those legally on the premises from any foreseeable harm. Should the facts of this matter reveal that the apartment complex owner failed to provide adequate security to protect those on its premises, Gerald Watson’s family may seek justice and elect to pursue legal claims for his wrongful death.

Based upon its prior successful experience in handling security negligence claims on behalf of victims and their families, The Murray Law Firm suggests that photographs and a thorough, unbiased inspection of the property will need to be performed immediately, before any evidence may be repaired, damaged or destroyed. Given the complexities of pursuing a negligent security case, it is imperative that the victim’s family retain an experienced attorney who can ensure the preservation of any and all evidence that may support such a claim.

We’ve Recovered Millions for Victims of Apartment Security Negligence…Contact us Now for a Free Consultation.