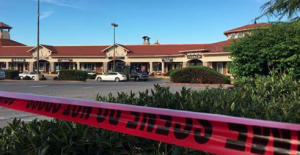 Did negligent security contribute to this shopping center shooting and are justice and compensation available to the victims?

Gunfire erupted outside a Sevierville, Tennessee shopping center on Tuesday afternoon, April 16, 2019, leaving two people dead and one injured. According to KnoxNews.com, “[o]fficers descended on…an outlet mall…after several people called 911 to report a shooting outside the [a] store at 3:49 p.m.”  The news story reports “[a] man with a gun walked up…and opened fire outside a store, killing a woman and wounding a man before turning the gun on himself.”  Authorities identified the victims, “24-year-old Olivia Katelyn Cunningham of York, Pennsylvania…The male victim, 75-year old John Marr of Templeton, Massachusetts, was taken to the University of Tennessee Medical Center.”  WVLT.tv reports on the deceased shooters criminal history which “includes multiple theft, burglary, and aggravated burglary charges dating back to 2015…[and] a violation of probation charge against him from November 2017.” According to the media reports, it is believed that the shooter did not know the victims.

Shopping center patrons have a right to feel safe and secure while on the premises. The Murray Law Firm questions the level of security provided at the shopping center and whether this tragedy may have been prevented.

Based upon its prior successful experience in handling security negligence claims on behalf of victims and their families, The Murray Law Firm suggests that photographs and a thorough, unbiased inspection of the property will need to be performed immediately, before any evidence may be repaired, damaged or destroyed. Given the complexities of pursuing a negligent security case, it is imperative that the John Marr and the family of Olivia Katelyn Cunningham retain an experienced attorney who can ensure the preservation of any and all evidence that may support such a claim.

The Murray Law Firm has an extensive and successful record representing victims and their families and security negligence.  We have obtained over $100 Million in verdicts and settlements for out Clients, including a $29.25 million dollar verdict for a victim of an unsafe property. We offer our legal assistance, if desired.