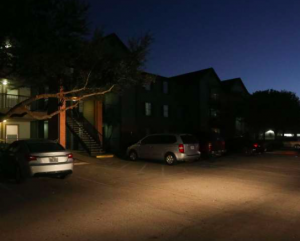 A mother and her two children were reportedly shot during a violent robbery outside their Mission Falls apartment home Tuesday morning, November 15, 2016.

KHOU News reports, the fatal shooting occurred “just before 9 p.m. at the Mission Falls apartments in the 10400 block of Greens Crossing Boulevard.” According to The Houston Chronicle, a mother and her two young daughters were unloading groceries when “three men drove up in a sedan.” The assailants apparently opened fire during the course of the robbery.

Local residents told The Houston Chronicle, “crime and violence in the area has worsened.” One neighbor voiced security concerns to media, noting “the lights along the edge of the property have not worked for a while, and the entry gate has been stuck open for months at the complex.”

We’ve Recovered Millions for Victims of Apartment Security Negligence…Contact us Now for a Free Consultation.