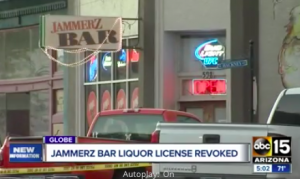 Could this tragic Globe bar shooting have been prevented and are justice and compensation available to the victims’ families?

Security measures are in question following a deadly shooting inside Jammerz Sunday night, November 11, 2018, which claimed the lives of three people and left two others injured.

According to AZ Central News, the gunman “was playing pool at the bar before opening fire just before 10:30 p.m.” Tragically, Ashley Sanchez, Daniel Albo and Cristi Licano succumbed to fatal injuries. Charlene Peak and Scott Mills suffered injuries. Their current conditions have not been released.

An ABC 15 investigation, based on “[p]aperwork filed by state regulators” alleges that, “only one employee was working at Jammerz at the time of the shooting, and was outside smoking marijuana when the suspect opened fire.” The bar has reportedly since “had it’s liquor license suspended.”

Bar patrons have a right to feel safe and secure while on the premises. The Murray Law Firm questions the level of security provided on the property and whether this tragedy may have been prevented.

Generally, property owners are required to protect all those legally on the premises from any foreseeable harm. Should the facts of this matter reveal that the bar owner failed to provide adequate security to protect those on its premises, the families of Ashley Sanchez, Cristi Licano and Daniel Albo may seek justice and elect to pursue legal claims for their wrongful deaths. Additionally, Charlene Peak and Scott Mills may pursue legal claims for their injuries.

Based upon its prior successful experience in handling security negligence claims on behalf of victims and their families, The Murray Law Firm suggests that photographs and a thorough, unbiased inspection of the property will need to be performed immediately, before any evidence may be repaired, damaged or destroyed. Given the complexities of pursuing a negligent security case, it is imperative that the victims and their families retain an experienced attorney who can ensure the preservation of any and all evidence that may support such a claim.

We’ve Recovered Millions for Victims of Bar Security Negligence…Contact us Now for a Free Consultation.